A project undertaken at Australian National University, and supervised by Anthony Millar

Global pesticide use in 2020 is estimated at 3.5 million tonnes. Although crucial to underpin food security by combating the myriad of plant pathogens, there are broad negative impacts on the environment and human health, and pesticides represent costly inputs in farming systems. An alternative approach to avoid these issues is the breeding of disease resistant crops via the introduction of genes conferring disease resistance. However, the biology underpinning this is extremely complex, and most resistance genes only provide protection to a narrow range of pathogens, which quickly mutate and enable them to overcome resistance in the ongoing plant pathogen-plant defense arms race. 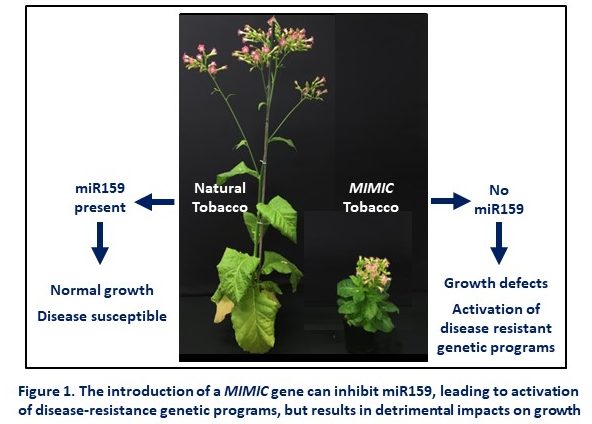 In this project, the research aims to characterise a newly discovered fundamental plant defense system and investigate whether it can be manipulated to develop novel plant defense strategies that would confer lasting broad-spectrum resistance. Key to controlling this defense system is specialised gene known as a microRNA, which produces a small RNA that acts a master regulatory switch able to activate/repress complex genetic programs (100s of different genes working together result in a particular trait). The particular microRNA of interest (miR159) is ancient, being found unchanged in all land plants, implying that it is indispensable for terrestrial plant life.

Using the model plant species Nicotiana tabacum (tobacco), we have shown that miR159 is a master switch controlling a fundamental pathogen defense response composed of a broad spectrum of defense genes. Using gene technology approaches, we are able to switch miR159 off via the synthesis of another RNA called a MIMIC, that binds to the microRNA and switches off its function. Turning miR159 off, in turn enables the large array of plant disease resistance genes to become highly active, which would be predicted to result in a broad-spectrum defense response.

Indeed, we showed that the MIMIC tobacco plants are immune to Phytophthora, an oomycete that is a widespread plant pathogen that can have devastating impacts on plants (the great Irish potato famine was due to Phytophthora infestans). However, addition of this MIMIC gene to turn off miR159 is highly detrimental to the plant; cell growth is severely inhibited resulting in dwarf plants that set very little seed (yield) (Figure 1). Therefore, we hypothesis that this genetic defense mechanism is usually fully suppressed, being activated only as a last resort in battling plant pathogens. This exciting finding raises many questions and opportunities.

Our Hermon Slade project has three broad aims. Firstly, although we have shown that the MIMIC tobacco (miR159 deficient) is resistant to Phytophthora, we ask also are they resistant to pathogens from other kingdoms (fungal, bacterial and viral) as would be predicted from the defense genes that are activated in these MIMIC tobacco plants. Hence, we will challenge these plants with the fungal pathogen Fusarium and the bacterial pathogen Pseudomonas to test this prediction.

Secondly, we have shown this miR159 defense-mechanism to work in tobacco, but is this the case in other species of plants, especially those that are economically important? To investigate this, we will turn off miR159 in highly related species such as tomato and potato via the introduction of the MIMIC gene, and investigate whether this leads to broad-spectrum resistance in these two agriculturally important Solanaceae species which are highly susceptible to many pathogens.

Finally, can we manipulate this miR159 genetic switch so as to engineer broad-spectrum disease-resistant plants without the growth/yield penalty (Figure 2)? This could be achieved by re-engineering the MIMIC gene so it is only activated upon pathogen attack, rather than being activated all the time as we have shown in previous proof-of-concept experiments. Our ultimate goal would be to generate Solanaceae crop plants with broad disease resistance, but without the dwarf stature (growth/yield) penalty. This could have enormous benefits to agriculture and the environment, generating novel disease resistance crops plants  sthat would avoid the use of chemical pesticides and help underpin food security.