The evolution of tool use in Australian assassin bugs (Reduvildae: Harpactorinae).

A project undertaken at the Western Australian Museum, and supervised by Dr Fernando Soley.

Tool use is a rare phenomenon in animals, despite its potential usefulness for solving ecological challenges. The general scarcity of this behaviour is likely explained by the complexity that it requires. Tool use involves the appropriate choice of an environmental item, and its adequate manipulation to obtain some benefit that is otherwise inaccessible or costly to achieve. These behaviours often involve complex motor routines and may require sophisticated cognition. Famously known tool-using examples are those occurring in certain vertebrate species, mainly primates, and birds, but some invertebrates have joined this select group of animals.

On the one hand, the ‘smart’, culturally-transmitted use of tools appears to be restricted to animals with sufficient cognitive ability, such as certain mammals and birds. On the other hand, insects and other animals have also evolved to become tool-users, bypassing the need of a certain mental toolkit. 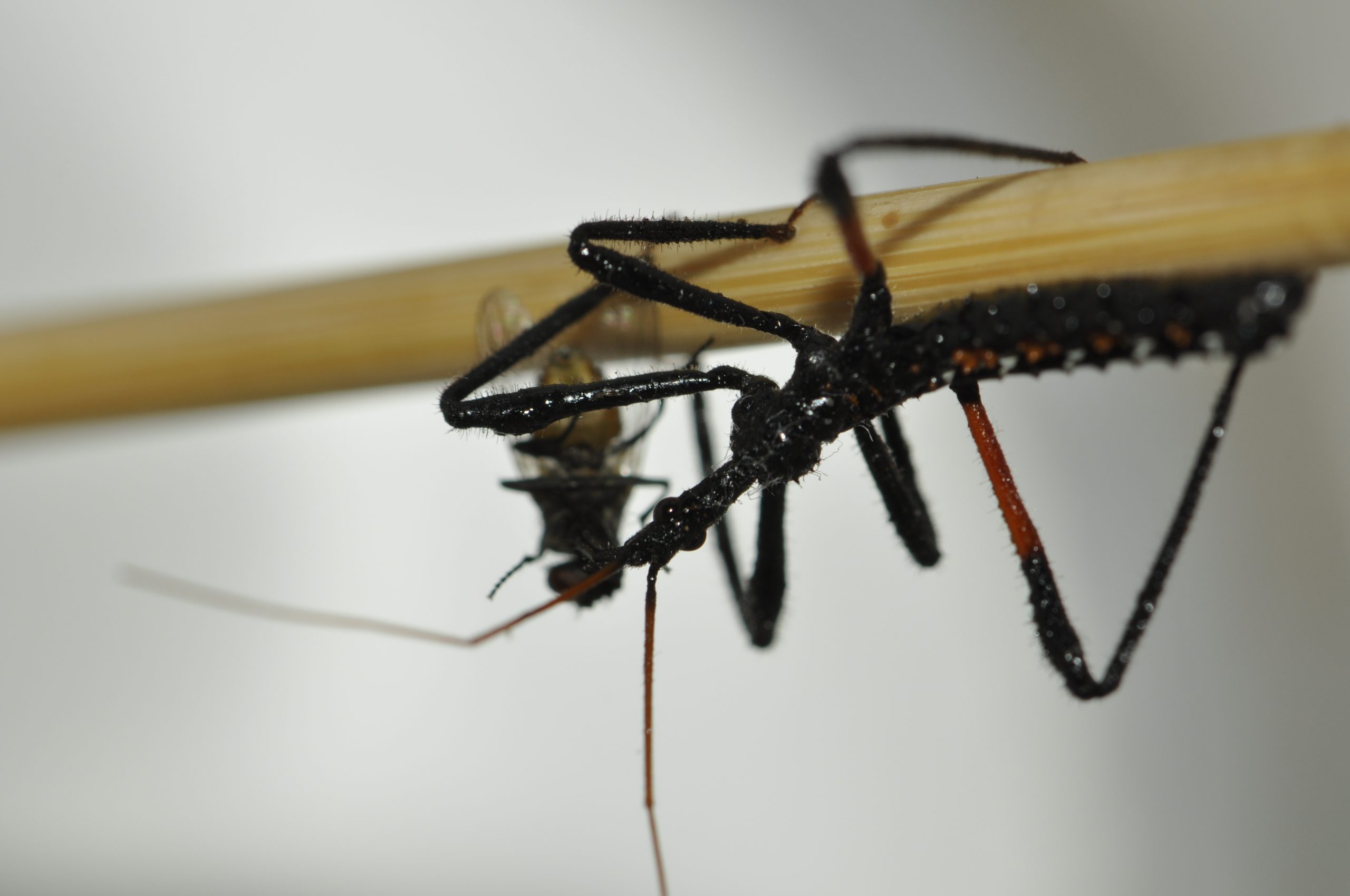 Contrary to cognitively-driven tool use of vertebrates, in arthropods, tool use appears to be the result of innate, ‘genetically-fixed’ behaviour. This is because tool use in these organisms usually occurs as innate and rigid behaviour that does not require deep learning. However, innate components of tool use have also been identified in ‘smart’ tool users, so that the two distinct routes for the emergence of tool use (i.e., cultural or Darwinian) may be separated by a blurry line. Hence, the exploration of insect tool use can also contribute to our general understanding of how tool use evolves in general.

Although generally rare in invertebrates, tool-use occurs with relatively high frequency in assassin bugs (Hemiptera: Reduviidae) – these are predatory insects that stab and paralyze their prey (other arthropods) with a beak-like rostrum. Several species of assassin bugs cover their bodies or eggs with resins that they extract from plants. The function of this behaviour remains largely unexplored, with some evidence supporting a prey-capture function and/or a role in egg-protection. 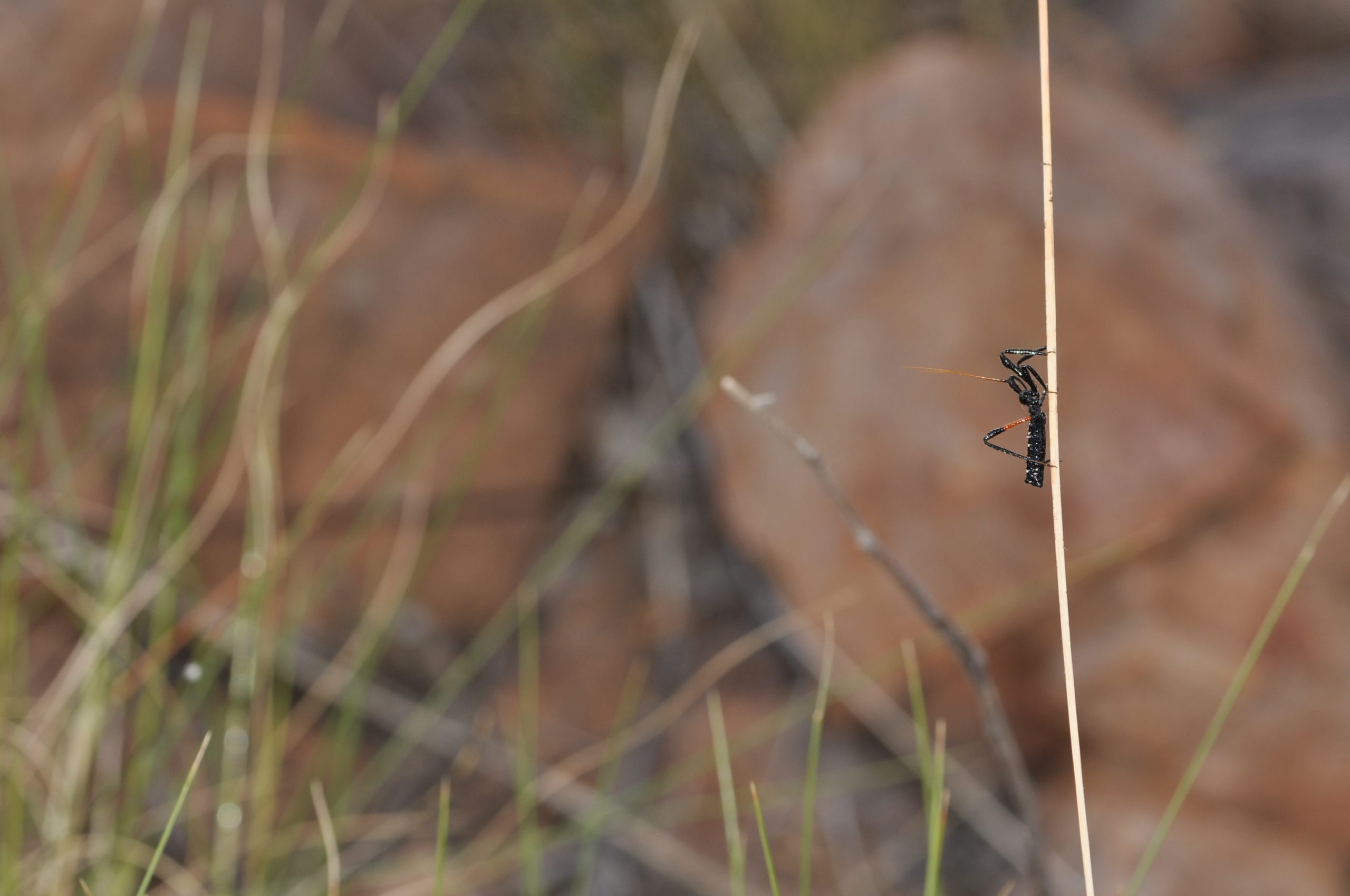 In 2018, we found five undescribed species of tool-using assassin bugs in the East Kimberley region of Western Australia. All species were observed gathering resin, some from different plant sources. Morphological and behavioural descriptions of these ‘resin bugs’, along with information about their natural history and their phylogenetic placement, will serve to infer ancestral behaviours and conditions that may have facilitated tool use in this lineage. In addition, we will explore the function of resin in several of these species, to infer the original function of resin in ancestral species.

This will be important for understanding why tool use, a generally rare behaviour, is particularly common in Australian assassin bugs from the Kimberley region. Further, by incorporating DNA sequences from these species into an existing global dataset of resin bugs, we will be able to reconstruct the evolutionary history of resin-use in this particular lineage. These findings will contribute to our understanding of how tool use behaviour can emerge in both invertebrate and vertebrate animals. 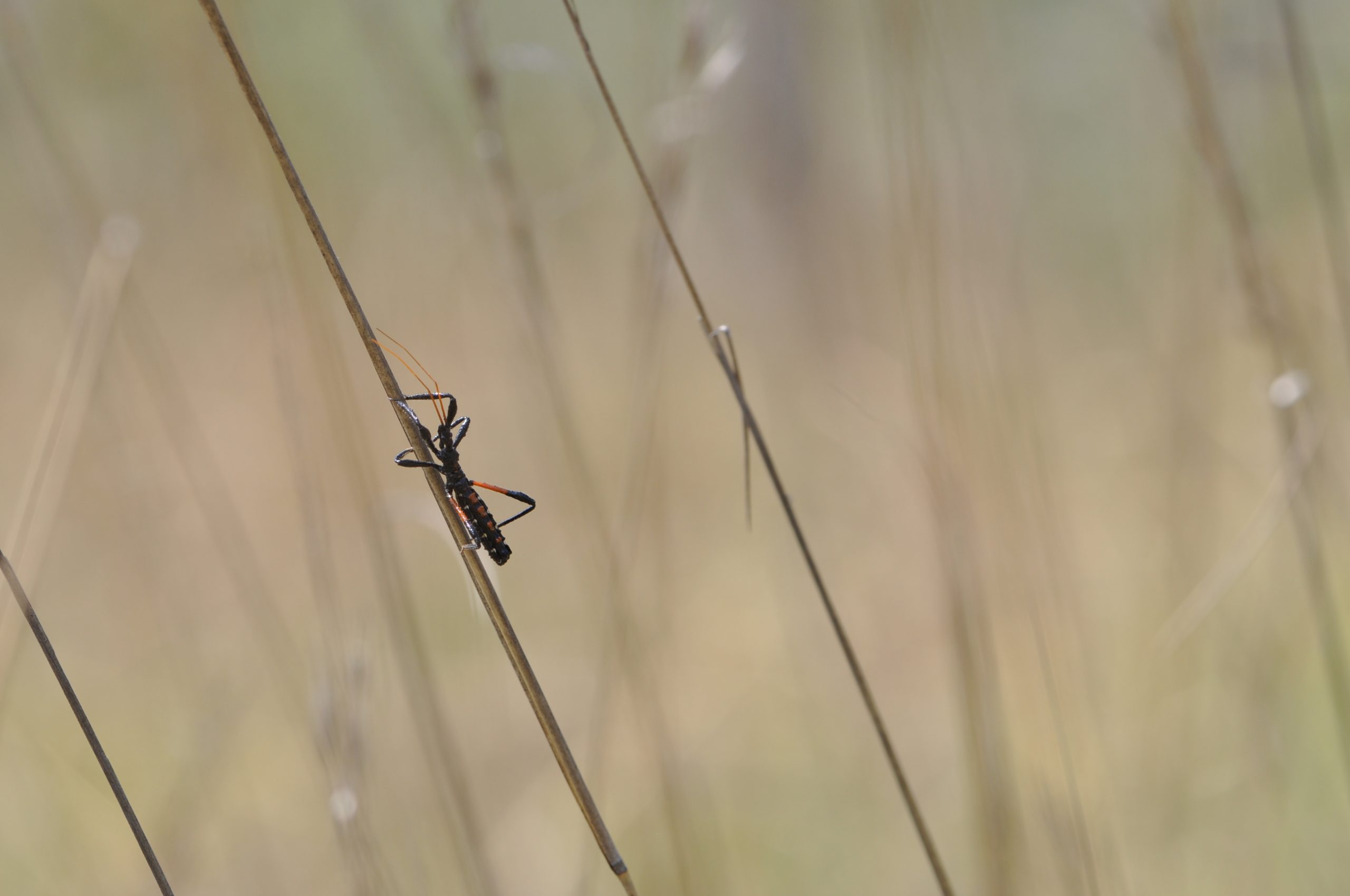 In invertebrate animals, and particularly arthropods, innate tool use is thought to emerge from a sudden transfer of elaborated and pre-existing motor routines into a new context (e.g., by mutations that change the threshold for expression of certain behaviour). This hypothesis has never been tested and our recent findings suggest otherwise: that tool use can evolve in a more gradual fashion, from basic behavioural and morphological precursors.

If true, tool use may also emerge from gradual and constant exposure to particular environments that unmask genetic variation that is then susceptible to natural selection. Observations and experiments in natural settings will reveal the intricacies of resin function in a variety of resin bugs from Australia. Together, this information will help disentangle the evolutionary steps that facilitated the evolution of tool use in this lineage, and will contribute to our general understanding of why tool use has evolved in certain animals and not others.