A project undertaken at the ARC Centre of Excellence in Vision Science, Research School of Biology, The Australian National University and supervised by Dr Ajay Narendra and Jochen Zeil

The Jack jumper ant, Myrmecia croslandi is found along the southeast coast of Australia and typically nests in urban parks and gardens. They are unusual among ants due to their large eyes and also because they forage individually and do not produce pheromone trails to assist foraging. We identified two aspects crucial in an ants’ daily life: (a) the abiotic factors that regulate foraging behavior, and (b) the navigational knowledge of individual ants.

The jack jumpers are strictly diurnal ants, active between the end of October to late April (Jayatilaka et al., 2011). Their daily and seasonal activity is heavily influenced by surface temperature, with most animals typically operating between surface temperatures of 10-30°C. We discovered that they tolerate much higher temperature, upto 48°C, which is well beyond what they typically experience in natural conditions. These findings become further interesting when compared to their nocturnal relative, Myrmecia pyriformis. The nocturnal ants are active throughout the year and cease foraging on days when surface temperatures drops below 6°C (Narendra et al., 2010). Their foraging activity is however regulated by ambient light intensity and not by temperature. Thermal limits of animals have typically been determined by pushing animals to lethal limits. We successfully tested a non-lethal way of determining thermal limits of ants that are ecologically relevant. We did this measuring the change in walking speed of animals at different temperatures. The increase in walking speed corresponds closely to the thermal maximums that animals typically endure (Fig. 1). 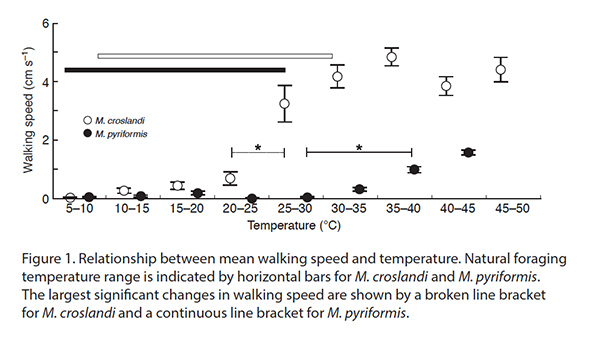 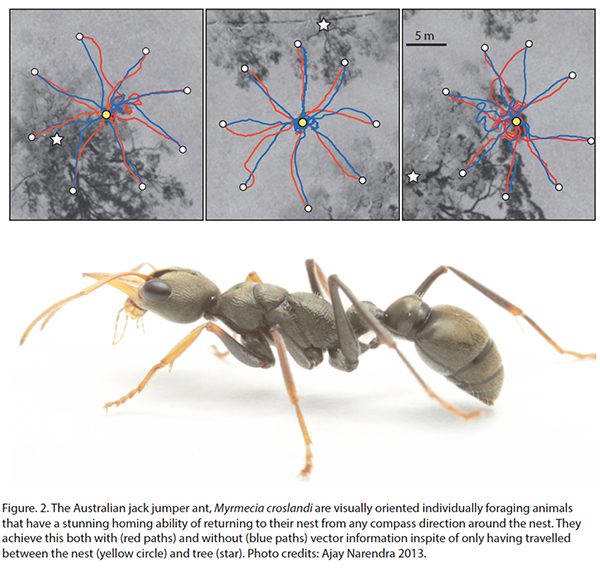 Figure. 2. The Australian jack jumper ant, Myrmecia croslandi are visually oriented individually foraging animals that have a stunning homing ability of returning to their nest from any compass direction around the nest. They achieve this both with (red paths) and without (blue paths) vector information in spite of only having travelled between the nest (yellow circle) and tree (star). Photo credits: Ajay Narendra 2013.

Given the jack jumpers are solitary foraging individuals we determined the information individual ants use to navigate successfully between the nest and the food source in their visually rich habitat. We discovered that ants typically visit nest-specific Eucalyptus trees on which they forage for carbohydrate or protein food. Some individuals make short forays into other directions. Since most ants travel only to the tree (and hence familiar with the nest-tree route), we aimed to identify the extent of navigational knowledge among individual ants. We addressed this by capturing homebound ants and displacing them at different compass directions around the nest at 10m or more (Narendra et al., 2013). We filmed ants as they made a decision to travel in a particular direction and tracked their paths using a Differential GPS. Ants released at these unfamiliar locations, to our surprise, briefly scanned the environment and made a decision to head directly home (Fig. 2). When ants were released far from the familiar locations they relied on their path integrator, i.e., they travelled completely oblivious to the displacement. This surprising ability to directly return home from previously unvisited locations was unexpected. By analysing the panoramic scenes available to the ants, we show that in principle, ants could return home by comparing their current view with the memorised nest views that they might have captured from different compass directions around the nest. As part of ongoing investigations we intend to pinpoint how and when do animals learn the information around the nest.