A project undertaken at the School of Plant Biology, University of Western Australia, and supervised by Etienne Laliberté and Treena Burgess

Soil pathogens can wreak havoc in native vegetation. For example, 40% of plant species from south-western Australia’s (SWA) global biodiversity hotspot are susceptible to the introduced pathogen Phytophthora cinnamomi, or the ‘biological bulldozer’. Yet paradoxally, endemic soil pathogens are also increasingly recognised as key agents in the maintenance of plant diversity. This occurs when abundant plant species promote the build-up of host-specific pathogens that harm them more than their competitors, thus preventing dominance and enhancing coexistence – something known as ‘negative plant-soil feedback’. 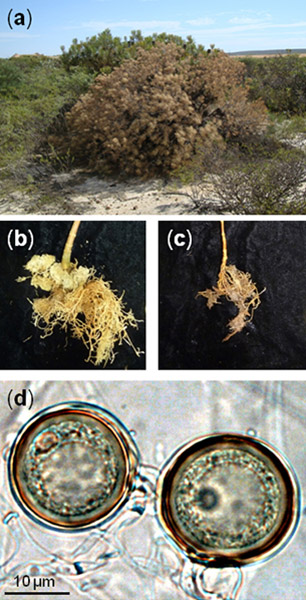 Figure 1. Effects of Phytophthora arenaria in kwongan. (a) Wilted Banksia
grossa near Eneabba, Western Australia, killed by root and collar rot caused by P. arenaria. (b) Healthy root system of a Banksia occidentalis seedling, showing dense cluster roots near the base of the stem. (c) Diseased root system of a B. occidentalis seedling inoculated with P. arenaria. (d) The thick-walled oospores of P. arenaria are thought to favour survival in the seasonally dry climate of kwongan. Photo credits: (a) G.
Hardy; (b–d) A. Simamora.

The recent discovery of new Phytophthora species from SWA’s megadiverse kwongan shrublands -some of the world’s most species-rich plant communities- raises the question: are these pathogens a threat to plant biodiversity, or an ally? Probably endemic to SWA, these Phytophthora species only cause episodic dieback of vegetation, and might therefore drive the type of negative plant-soil feedback that promotes plant diversity. Our project tested this important hypothesis. This has significant implications for conservation, since widespread application of phosphite to treat Phytophthora cinnamomi infestations might, ironically, also harm native Phytophthora species that could play a role in maintaining the exceptionally high plant diversity of kwongan shrublands.

The overall objective of our project is to determine whether and how native Phytophthora species contribute to the maintenance of the exceptionally high plant species diversity of south-western Australia’s kwongan shrublands.

This project has first allowed us to compile existing data and write a literature review about the role of native soil-borne pathogens in promoting plant diversity in hyperdiverse shrublands (Laliberté et al. 2015). Then, in a glasshouse experiment, we grew Proteaceae and ectomycorrhizal (ECM) plant species from hyperdiverse shrublands alone and in competition with each other, and in the presence or absence of native Phytophthora  spp (Albornoz et al. 2016). We hypothesized that native Phytophthora species are more detrimental to Proteaceae than co-occurring ECM plants, due to a trade-off between highly efficient P-acquisition and pathogen defence, and that this equalizes differences in competitive ability between these two plant groups. When seedlings were grown alone, biomass of non-mycorrhizal plants was reduced in the presence of Phytopthora , while ECM species were unaffected by this pathogen.  When non-mycorrhizal and ECM species were planted together, ECM plants grew better in the presence of Phytophthora than in its absence, because Phytophthora  reduced the growth of the non-mycorrhizal competitors. Growth of ECM plants was positively correlated with per cent root colonization by ECM fungi, but this was only significant when ECM plants were grown in the presence of Phytophthora. This study shows that native soilborne pathogens equalized differences in competitive ability between seedlings of contrasting nutrient-acquisition strategies, thus supporting the hypothesis proposing a trade-off between highly efficient P-acquisition and resistance against root pathogens. We found that non-mycorrhizal cluster-rooted species may be the most efficient at acquiring the growth-limiting resource, but that co-occurring ECM species are better defended against root pathogens. Our results suggest that native soilborne pathogens and ECM contribute to the maintenance of the plant hyperdiversity in severely P-impoverished ecosystems.