A project undertaken at Monash University and led by Dr. Adam Kessler

Calcium carbonate (CaCO3) sands cover most of the sea floor around the Great Barrier Reef, and many other environments around Australia. These environments form important marine habitats, and support fisheries and tourism and make up the bulk structure of coral reefs. 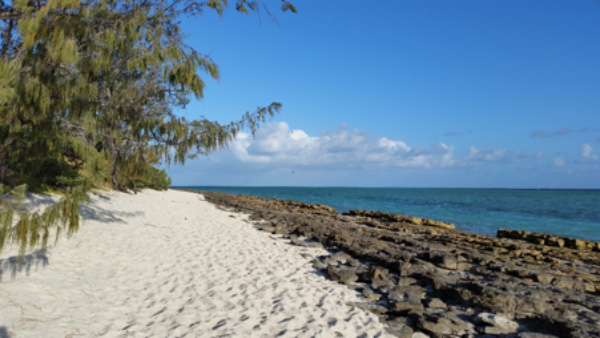 Under acidic conditions, calcium carbonate dissolves. Thus, like the corals and shells that form them, CaCO3 sands may dissolve as the acidity of the ocean rises due to the rising CO2 in the atmosphere. The rate of this dissolution is determined by the alkalinity of the water that filters through the sand (the ability to buffer acids), which is turn is determined by the series of carbon mineralisation reactions whereby microorganisms in the sediment convert organic carbon to carbon dioxide (CO2). Unlike corals, the dissolution of CaCO3 sands has received little scientific attention, and the small-scale kinetics that drive CaCO3 sand dissolution are not well known.

Carbon mineralisation generally follows a set order of reactions (e.g. respiration), but recent work shows that in many sands, the expected order does not occur, and instead the dominant reaction is fermentation. This significantly affects alkalinity production, and therefore the ability of those sands to resist dissolution under ocean acidification may be reduced. However, the specific kinetics of fermentative carbon mineralisation and its effect on the dissolution of CaCO3 sands is unknown.

A recent pilot study has shown that the rate of alkalinity generation in CaCO3 sands from the Heron Island reef is much lower than expected from normal mineralisation reactions. H2 production was also detected, indicative of fermentation. If fermentation is dominating as this data suggests, the ability of CaCO3 sands to resist dissolution under ocean acidification may be much lower than expected.

This project will determine the kinetics of carbon mineralisation and calcium carbonate dissolution in permeable sands under current and predicted future ocean conditions.