Conserving Threatened mammals in the face of fire and predation

The introduced red fox and feral cat have contributed to the extinction of more than 20 native mammal species in Australia and currently threaten more than 100 bird, mammal and reptile species at risk of extinction. Emerging evidence suggests that the impacts of these predators are amplified following fire, contributing to increased extinction risk.  Managing the combined impacts of invasive predators and fire is a formidable challenge for land managers.

Figure 1. A swamp antechinus, Antechinus minimus, one of the federally listed threatened species that occurs in the study area. Credit: Barbara Wilson. 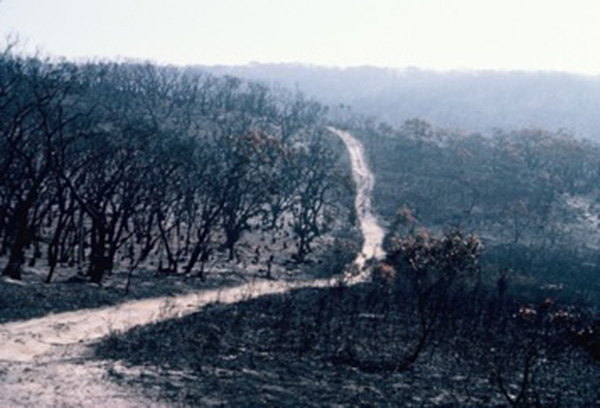 Predator management has focused on lethal control including poison baiting, however a number of factors constrain how effective lethal control is, and where it can be used. Complex habitat structures can reduce predation rates as vegetation cover both provides prey with refuge to escape to and obscures a predator’s search image, thus making hunting less efficient. Patchy fires that conserve unburnt refuges have been suggested as one approach, but this is difficult to achieve in practice and the results are unpredictable. New methods for conserving threatened fauna in post-fire environments are needed if further extinctions are to be prevented. Providing supplementary refuges in post-fire environments is an exciting new approach that could reduce predation rates and increase population persistence post-fire.

The overall objective of the project is to assess how ground mammals respond to the provision of supplementary refuges (wire tunnels) in post-fire environments. The study will build on long term mammal monitoring data (30 years) from the Otway Ranges, Victoria where cats and foxes are present, and both planned and unplanned fires occur. While the area is known for the species richness of ground-dwelling mammals, steep declines of two threatened species (swamp antechinus and New Holland Mouse) have been recorded recently. Other threatened species include the white-footed dunnart, long-nosed potoroo and southern brown bandicoot. This study will employ before-after, control-impact field experiments to assess how native mammals respond to fire and the provision of artificial refuges.